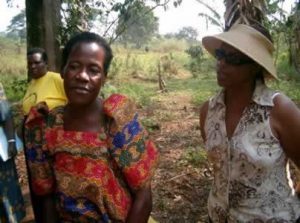 In the 1980’s, Philly Lutaaya , a well known Ugandan musician, had embarked on a vigorous campaign trail on HIV/AIDS awareness and the rights of People Living with AIDS.  Philly was the first prominent Ugandan to go public as being HIV positive.  He was a trailblazer who gave AIDS a human face by declaring a vision of openness, putting Uganda in the lead in combating AIDS.  He put all of his last energy into a video documentary “ALONE and Frightened,” shown on PBS in the early 1990’s.  His music album on AIDS, “Giving a Face to AIDS,” was a one-man campaign that grew into a global force to champion the rights of People Living with AIDS.  Indicators show that the spread of HIV/AIDS is on the decline in parts of Uganda due to Philly’s efforts.  But in rural communities such as Gomba County, Philly’s hometown, the HIV infection rate is still higher than 25%.  Philly died of AIDS in 1989.  His last wish was to inform every Ugandan and the International Community about HIV/AIDS.

OTYO! (A Sigh of Relief) was conceived during the summer of 2004 by its Founder/Director Ms. Jolly Bugari.  Ms. Bugari was born and raised in rural Uganda. As a Ugandan, Ms. Bugari was deeply affected by the AIDS crisis in her country. She lost siblings, family members and close friends to the disease.  This compelled her to take action, and had inspired her original focus to address the needs of all people infected or affected by HIV/AIDS in rural Uganda. One of Ms. Bugari’s strongest influences in starting OTYO! was her close ties with the Philly Lutaaya AIDS Campaign in Uganda.  After moving to California more than 30 years ago and completing her graduate degree in Public Health, Ms. Bugari worked tirelessly to launch OTYO!, as an international non-profit community health organization based in San Francisco, California, to address these needs in Uganda.

As Jolly looked deeper into understanding the dynamics of the crisis, her assessment determined that the focus should be on addressing the needs of women and children infected and affected by HIV/AIDS.  Further, the needs of these women and children should be addressed by creating income generating opportunities for women through sustainable, nutritional-based farming, and through health education/nutritional counseling for children.

Although OTYO! is an American institution, the basis of OTYO! is very much Ugandan. The name of the organization, OTYO!, is a word in some Ugandan languages that expresses “a sigh of relief”.  This name was chosen specifically because work done by OTYO! will offer relief to women, orphans and vulnerable children in rural communities in Uganda.

In Uganda, OTYO! will collaborate with the Ministry of Health – STD/AIDS Control Program, Uganda AIDS Commission (UAC) and Makerere University Institute of Public Health (MUIPH), local community-based organizations, and Trust for Africa’s Orphans – UK.  OTYO! will also keep its close connection to the Philly Lutaaya AIDS Foundation in Kampala by working with his older brother, A.K. Lutaaya, who will serve as the local point of contact for OTYO! in Uganda.

In the United States, OTYO! will work with San Francisco State University’s Department of Health Education (MPH Program), as well as other public and private institutions and organizations.